Local girl scout from Troop 30506, Rachel Martin, filmed a commercial for PBS about a project she is working on with a textile recycling company called Helpsy.

Based out of New York, Helpsy is a B corp, which means Helpsey reaches high standards of environmental sustainability and community goals. Helpsy is dedicated to collecting any and all textiles including clothing, shoes, accessories, linens, and anything with fabric, no matter the condition.

Martin’s personal involvement with Helpsy truly started about seven years ago when Westborough girl scout groups began organizing monthly textile drives through Helpsy. Over the summer, local girl scout leaders received the opportunity from Helpsy for a girl scout to film a commercial. Helpsy wanted to include a girl scout’s perspective on collaborating on the textile drives. Martin agreed to participate in the interview in New Jersey in August 2021, but little did she know just how inspired she would become.

After filming the commercial, Martin realized the importance of disposing of unwanted clothing to protect the environment: something she has always cared deeply about. Not only that, but Helpsy aligns with Martin’s values as they truly care about paying their working living wages as well as environmental sustainability. Thus, for her Gold Award project for Girl Scouts — a project that can be continued, impacts the community, and requires at least 80 hours of service — Martin decided to become a Girl Scout Ambassador for Helpsy. In terms of this project, Martin has two main goals: to help the environment and to educate people.

Martin says, “I’m excited to see what the project turns into and the impact I can have.”

Martin wants to help the environment by lowering the amount of waste in landfills and reducing carbon emissions. She also strives to help people realize the impact of clothing disposal and to give people the opportunity to dispose of their clothing in a more sustainable way.

Martin says the clothing crisis isn’t greatly acknowledged, so she would like to help educate people on how to hold their own textile drive and the impact that it will have.

As secretary of Troop 30506, Martin is clearly a natural leader and is passionate about protecting the Earth.

“It is definitely really empowering to feel like, as a high school student, I can make a difference in peoples’ lives and on the environment,” Martin stated.

Lisa Sciannella, a helpsy employee, has been a crucial figure in Martin’s project. Martin also has other supporters including her parents, her adviser from the Gold Award Committee, and local Girl Scout leaders.

To help Martin, Helpsy, and the environment, please consider donating to the textile drives. Bring textiles (clothing, shoes, linens, materials with fabric) in any condition to the main entrance of WHS from 9:00am-12:00pm on the last Saturday of every month. You can also visit https://www.helpsy.co/ or check out Martin’s commercial below. 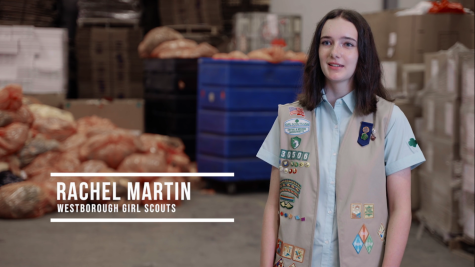