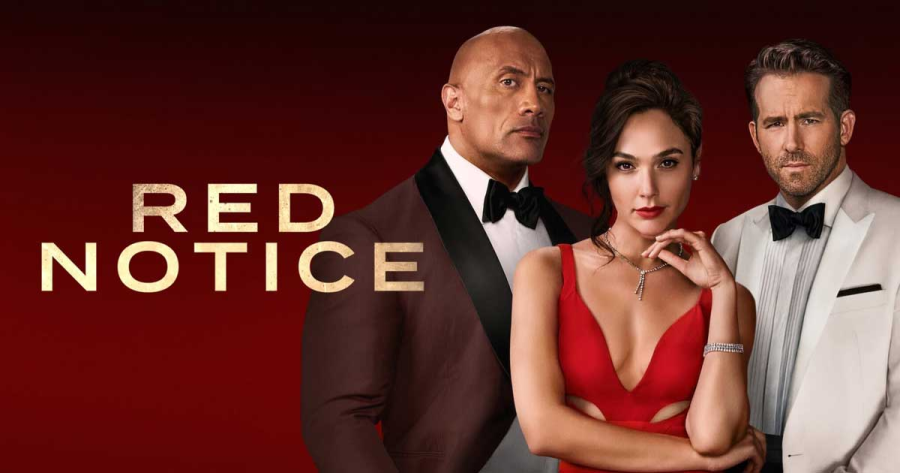 Red Notice is a new movie (released on Nov. 5) on Netflix starring Ryan Raynolds, Dwayne Johnson, and Gal Gadot. The movie centers around a professional art thief referred to as Booth, an FBI criminal profiler named John Heartly and a mysterious criminal called The Bishop. The story is based on Cleopatra’s three eggs: an urban myth that involves three hidden, 24 karat gold eggs. The three main characters are on a long-term search for these treasures and each has a different motive behind their hunt. With a double-cross around every corner, and plenty of twists and turns throughout the film, it is a must-see movie.

Red Notice was fast-paced and action-packed. There were numerous combat scenes. There was never a lull in the action because even the flashbacks were interesting. In every part of this movie, you will either be praying for a character’s life, or hoping the antagonist doesn’t survive. The most grasping part about this movie is that although there are a lot of fight scenes and action, there is also comedy, romance, and a little bit of fantasy. The writer, Rawson Thurber, has carefully balanced each genre to create a mystifying, worldly, and perfected motion picture.

With these three actors, it is plain to see that there will be a thread of comedy throughout the movie. It keeps the movie light-hearted and is a good balance for the intense plot. Although this combination of talented actors has not been seen before on screen, they work together as if they have known each other for ages. Their unique personalities complement each other and make the bonds between the characters feel realistic.

The Red Notice is overall an outstanding film that is perfect for family and friends. Although the rating of this movie is PG-13, this movie would most likely be appropriate for children who are able to watch Marvel and Star Wars movies. We highly recommend that you grab some popcorn and watch this movie soon!