The Lobby Observer • May 17, 2021 • https://lobbyobserver.org/18599/arts-entertainment/new-netflix-original-thunder-force-leaves-us-feeling-indifferent/ 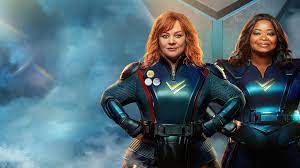 Thunder Force is a new action and comedy movie just released on Netflix, starring Melissa Mcarthy playing the role of Lydia and Octavia Spencer playing Emily. William Steveans plays the villain of “The King”. Written and directed by Ben Falcone, this film is a satisfactory watch for the family. Lydia and Emily, two childhood best friends reunite, turned into superheroes in order to try to defeat the evil and bring their city back to peace.

Emily’s parents started creating a serum in a lab in order to give “normal humans” superpowers. Emily and Lydia use the serum to work against the miscreants and hopefully defeat them all together. Miscreants are new rare super humans who have caused chaos in the city of current day Chicago. With no one able to stop them, they need to be contained before they cause permanent damage to the city. No one in the city of Chicago has been able to stop them until now.
These two friends haven’t seen each other in years because of their tremendously differing lifestyles. Once they reconnect through their high school graduation, Lydia gets sucked into Emily’s works of fighting the bad guys.

When the best friends reunite, chaos in the lab causes Lydia to obtain the superpower of strength. With no way of reversal, she needs to quickly learn how to function with her new superpower. Emily also starts to take a pill which causes her to acquire the superpower of invisibility. With the new superpowers they have just gained, they need to learn how to work as a team to take down the miscreants. Throughout the journey of navigating their new powers, Lydia’s personality brings out the comedic aspects of the movie.

The genre of this movie is action comedy, throughout the movie there are hilarious scenes between the characters Lydia and Emily. Their conflicting personalities of outgoingness and apprehensiveness allow for funny banter between the characters and personal growth. This movie has action with multiple scenes between Lydia and Emily having to fight the miscreants. In this movie McCarthey had some hilarious scenes but overall Spencer lacked comical lines.

During the film there were multiple action scenes which made up for the dull moments and intrigued the viewer to finish the movie. However, the movie also had many dull moments leaving you bored while watching, which may cause you to lose interest in the film. Some of the dull moments include the preparation before the fight scene and a few conversations.

Critics gave this movie a low overall rating of 22 rotten tomatoes. This rating correlated with our rating because we would rate this movie a 2 out of 4 because there were some comical and action packed scenes. Yet, we thought it lacked the conflict between the super heros and the villains, as the plot of the movie was to stop the miscreants (villians).

Even though the ratings were not as positive or ideal as we hoped, there are some mysterious turns in the plot that keep you wanting to watch more. Overall if you are looking for a good laugh with a little action, this movie is one you should put on your list and will leave you content. Will Emily and Lydia be able to defeat the miscreants causing chaos in their city? Watch Thunder Force to find out.